Some Comic Relief on the Illegal Immigration Issue

Building a wall wouldn't stop unauthorized immigrants from coming in, but it sure would stop them from going back!

Posted by Terri Givens at 5:11 PM No comments:

Important new report on the Economics of Immigration 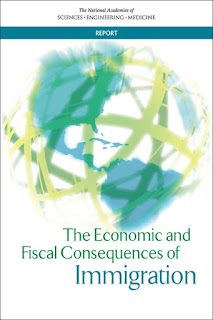 "More than 40 million people living in the United States were born in other countries,
and almost an equal number have at least one foreign-born parent. Together, the first
generation (foreign-born) and second generation (children of the foreign-born) comprise
almost one in four Americans. It comes as little surprise, then, that many U.S. residents view
immigration as a major policy issue facing the nation. Not only does immigration affect the
environment in which everyone lives, learns, and works, but it also interacts with nearly every
policy area of concern, from jobs and the economy, education, and health care, to federal,
state, and local government budgets.

Although this report focuses on the United States, the rise in the share of foreign-born
populations is an international phenomenon among developed countries. 1 And, given
disparities in economic opportunities and labor force demographics that persist across regions
of the world, immigration is an issue that will likely endure. Recent refugee crises further
highlight the complexity of immigration and add to the urgency of understanding the resultant
economic and societal impacts."

The New Observer provides some commentary for the current presidential election:
http://www.newsobserver.com/opinion/editorials/article105258706.html

BY THE EDITORIAL BOARD


Donald Trump is the Republican presidential nominee largely because of what he said in his announcement speech in June of 2015. He made immigration a threat to the United States and combating that threat a central element of his candidacy.
The text of his speech included only two lines on immigration, but the New York Timesreports that Trump decided to go on a riff about the subject. He said, “When Mexico sends its people, they’re not sending their best. They’re not sending you. They’re not sending you. They’re sending people that have lots of problems, and they’re bringing those problems with us. They’re bringing drugs. They’re bringing crime. They’re rapists. And some, I assume, are good people.”
Then he added, “It’s coming from more than Mexico. It’s coming from all over South and Latin America, and it’s coming probably – probably – from the Middle East. But we don’t know. Because we have no protection and we have no competence, we don’t know what’s happening. And it’s got to stop and it’s got to stop fast.”
Read more here: http://www.newsobserver.com/opinion/editorials/article105258706.html#storylink=cpy
But as is so often the case with Trump’s bombast, facts are getting in the way of his assertions. Indeed, the facts are the opposite of his most potent contention. Rather that hurting the United States, immigrants from Mexico and elsewhere are a boon to it.
That’s the conclusion of a new report from the National Academies of Sciences and Medicine, a consortium of private, nonprofit institutions chartered by Congress. The report assesses U.S. immigration trends over the past 20 years and weighs their impact on the labor market and their cost to government.

Francine D. Blau, professor of economics at Cornell University and chair of the 14-member panel of professors and researchers that conducted the study, says, “The panel’s comprehensive examination revealed many important benefits of immigration – including on economic growth, innovation and entrepreneurship – with little to no negative effects on the overall wages or employment of native-born workers in the long term.”
The report did find that new immigrants raise the cost of local government, primarily for public schools. But that expense pays big benefits. A summary of the report says, “As adults, the children of immigrants (the second generation) are among the strongest economic and fiscal contributors in the U.S. population, contributing more in taxes than either their parents or the rest of the native-born population.”
Trump claims that the threat is not from immigration itself, but primarily from immigrants who enter the nation by illegally pouring across the nation’s southern border, thus his promise to build a wall covering 1,000 miles or more. But the report found a sharp decrease in such immigration with the onset of the Great Recession. Since 2009, the population of unauthorized immigrants has remained stable with about 300,000 to 400,000 arriving annually and about the same number leaving.

The new report does not address Trump’s reference to immigrants and crime, but the National Academies of Science and Engineering and Medicine did look at the issue in areport last year. That report found that neighborhoods with a high percentage of immigrants had lower crime rates and foreign-born men aged 18-39 are jailed at one-fourth the rate of native-born men of the same age.
Trump’s candidacy is built on fear and wrong impressions. The tide of immigrants is not hurting American workers and it’s helping the economy, immigrant communities are safer than most in America and the population of unauthorized immigrants is not on the rise. There may be reason to vote for Trump, but a threat from immigration – legal and unauthorized – is not one of them.
Read more here: http://www.newsobserver.com/opinion/editorials/article105258706.html#storylink=cpy
Posted by Terri Givens at 5:11 PM No comments:

Immigration Texas has moved to http://givensimmigration.blogspot.com

In the latest news it's becoming clear that immigration will be a top issue for Republican candidates going into the primary season: 
Cruz: I Am a 'Proponent of Immigration Reform'

Accuses Obama of using issue to "scare the Hispanic community."

The issue of the detention of women and children has reached the federal courts and a ruling is expected today that may challenge the current policy:
‘The beginning of the end’ for Obama’s migrant family detention?

The UK has an election coming up on May 7, and immigration has been a hot topic there, as well, but the main anti-EU/anti-Immigration party looks like it won't do as well as expected:

And I'll end with some background on current immigration issues in Europe:

A global surge in refugees leaves Europe struggling to cope

Posted by Terri Givens at 5:02 AM No comments:

Europe and the World: Thoughts on my week in Germany - Immigration, Anti...

Europe and the World: Thoughts on my week in Germany - Immigration, Anti...: It was a fast-paced whirlwind trip to Germany, but it was a great opportunity to engage with a variety of people who are interested in issue...[click on the link above for more]
Posted by Terri Givens at 7:44 AM No comments:

Europe and the World: If it’s Thursday, I must be in Kiel

Europe and the World: If it’s Thursday, I must be in Kiel: After a pleasant evening in Hamburg, I arose Thursday morning to another nice,but colder, day. Since the trains were still on strike, the A...
Posted by Terri Givens at 1:15 PM No comments:

Europe and the World: From Stuttgart to Heidelberg to Hamburg

Europe and the World: From Stuttgart to Heidelberg to Hamburg: It is another gorgeous day in Germany, unfortunately I had to spend most of the day indoors. Despite the train strike, we were able to find...[click on link to see more]
Posted by Terri Givens at 1:32 PM No comments:

Europe and the World: From Freiburg to Stuttgart 4/21/15

Europe and the World: From Freiburg to Stuttgart 4/21/15: My day got off to a good start with a run along the river in Freiburg. Unfortunately later in the morning I learned that Deutsche Ba...[click on link to see more]
Posted by Terri Givens at 1:31 PM No comments:

Europe and the World: Lecturing across Germany - Day 1, Freiburg

Europe and the World: Lecturing across Germany - Day 1, Freiburg: I am doing a series of lectures in Germany this week, sponsored by the US Embassy in Berlin. I started Monday in Freiburg, and will be going...[click on link to see more]
Posted by Terri Givens at 1:31 PM No comments:

Some of my publications